Choosing the right underwear can make all the difference.

Like brushing your teeth or taking a shower, putting on underwear is probably one of those everyday habits you don’t put much thought into (unless you plan on getting lucky later).

But for women, what kind of briefs you’re wearing daily really does matter, especially since choosing the right underwear can have an impact on vaginal health. For instance, did you know that sometimes it’s really better to go commando?

But with all the different options out there — ranging from thongs to satin panties — it can be difficult to know which is the right pair for you. So we turned to our resident women’s health expert, Dr. Rebecca Brightman, who offered some tips and insights for the next time you go underwear shopping.

Which underwear fabric is best?

Whether you’re going for briefs or thongs, Dr. Brightman recommends choosing more natural materials over synthetic ones because they’re more breathable, especially during the summertime. So instead of nylon or spandex, she advises opting for a cotton material.

“People do a fair amount of sweating during the summer and if your underwear doesn’t let you breathe, that can lead to chafing and irritation,” Dr. Brightman tells KCM.

But if cotton isn’t your thing, then Dr. Brightman also recommends other types of natural underwear, such as ones made with silk, hemp, or linen. Regardless of which you choose, these more organic options tend to be naturally anti-microbial, which means they can kill microorganisms or stop their growth. That’s key in preventing yeast infections, that notoriously uncomfortable condition characterized by burning, itching, redness, and a white discharge from the vagina and vulva.

Changing your underwear once a day is kind of a no-brainer, though a 2019 survey did find that 45 percent of Americans wear the same pair of underwear for two days in a row.

But Dr. Brightman says it might not be a bad idea to change your underwear more often than daily, especially if you’ve gotten particularly sweaty after a workout or have been having a lot of vaginal discharge.

Even if you can’t get around to putting on a fresh pair of panties, Dr. Brightman recommends avoiding the regular use of panty liners, since the majority of them trap moisture and can lead to irritation.

Don’t be afraid of going commando

Though there’s a lot of debate around going panty-free at night, Dr. Brightman recommends it. “I’d avoid wearing underwear when you sleep, so the body can breathe,” she tells us.

This move is especially helpful for those prone to yeast infections, because it keeps moisture from building up, thus creating a bacteria-friendly environment.

But if you’re not exactly comfortable going to bed sans underwear, Dr. Brightman says wearing boxers or a loose-fitting nightgown are some handy alternatives.

Are thongs bad for your vagina?

Thongs have long been anecdotally associated with a host of health issues, including yeast infections, vaginitis, bacterial vaginosis, and urinary tract infections. But scientifically, that isn’t actually the case: Studies have concluded these conditions instead had to do with hygiene and sexual activity.

As with certain fabrics like synthetics, thongs can exacerbate existing conditions or lead to further irritations, and that’s certainly true for women who prefer to keep their nether regions bare.

“It depends on a woman’s anatomy — everybody’s different,” Dr. Brightman tells us. “But a lot of times, especially with women who have removed their pubic hair, there really isn’t a buffer between the skin and underwear, so those women may be more likely to get chafed and irritated.”

All undergarments should be handled with special care — and that isn’t just because they tend to be more delicate than the rest of your wardrobe. For instance, if someone has skin sensitivities, Dr. Brightman suggests washing underwear with a fragrance- and dye-free detergent and avoiding dryer sheets, which tend to contain added fragrances.

Dr. Brightman also recommends washing underwear separately, and preferably in warm or hot water to kill any bacteria. But she doesn’t necessarily believe the supposed rule that you have to replace underwear every year.

“If underwear is clean and fits, keep it,” she says. “I don’t think there is a single rule of thumb. If someone wears underwear with a cotton crotch and has a tendency to get irritated, then making sure the underwear is in good shape is a must!”

Need to restock your underwear drawer after reading Dr. B’s advice? KCM has handpicked a few pieces that align with these tips. 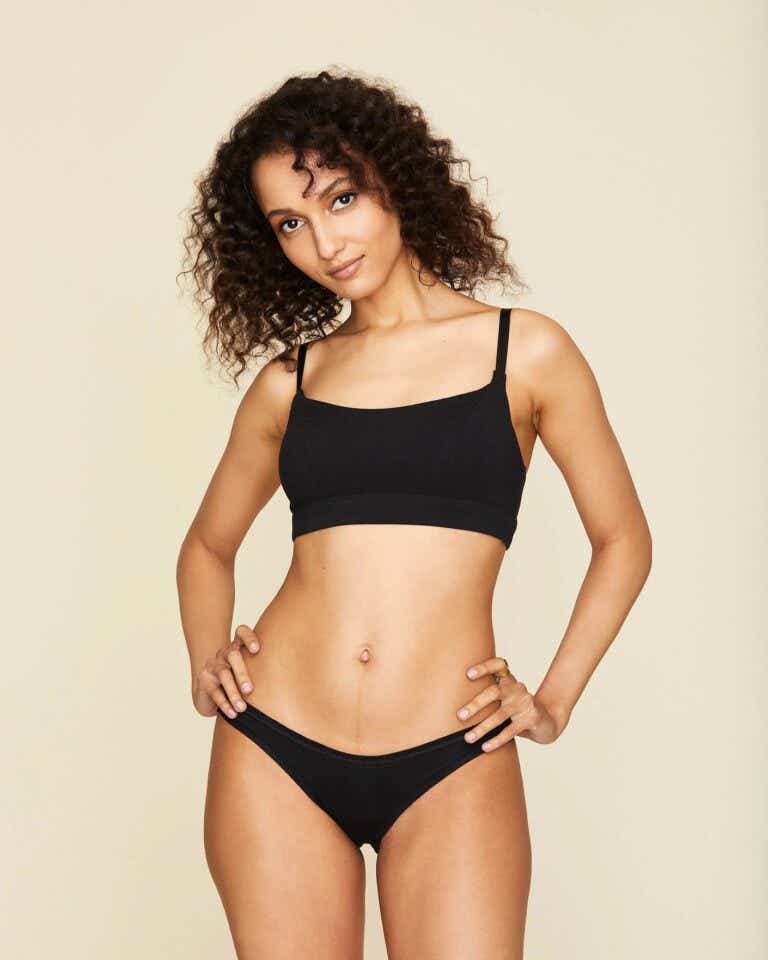 For those of us who prefer a bikini cut, look no further than these flattering Knickey undies. Made of certified organic cotton, this pair ranges in sizes XXS to 3X. And for those of us who crave sustainable underwear options, Knickey boasts that “organic cotton’s growth, harvest, and manufacturing processes are safe for farm and factory workers and are kind on Earth’s water and land.” Plus, the cheeky cut is sexy while still providing a touch of coverage. 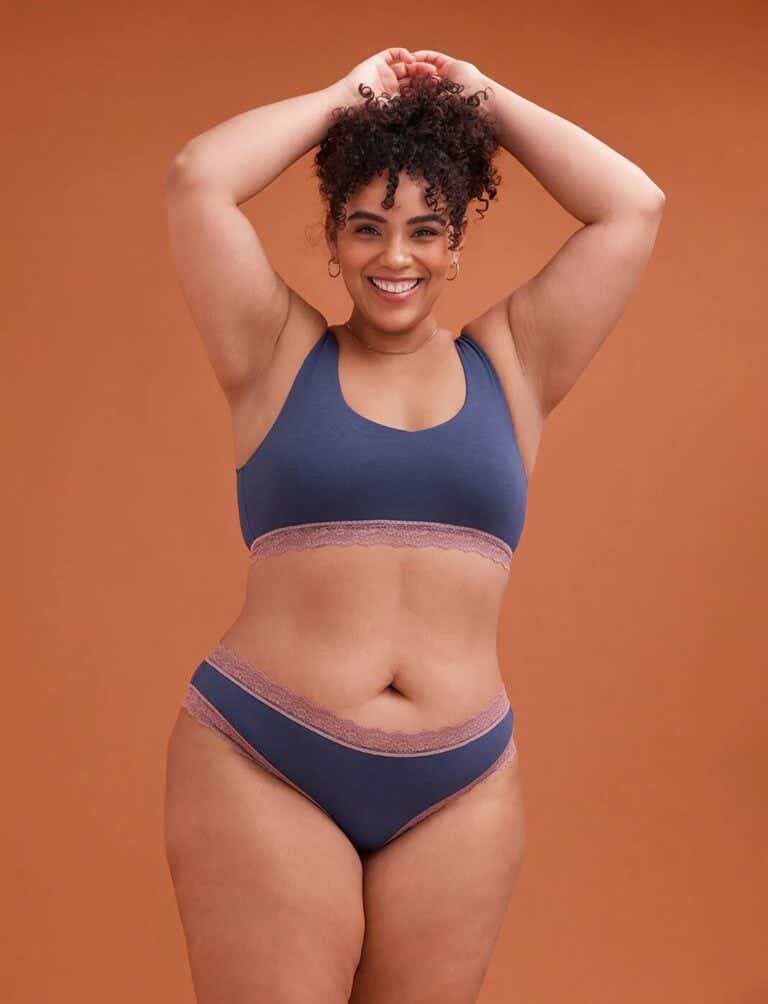 Lace can make you feel sexy, but when that’s all your underwear is made of, things can get itchy and uncomfortable. This pair only has lace around the legs and waist, so your lady bits will be covered in breathable cotton, unlike all-lace pairs. 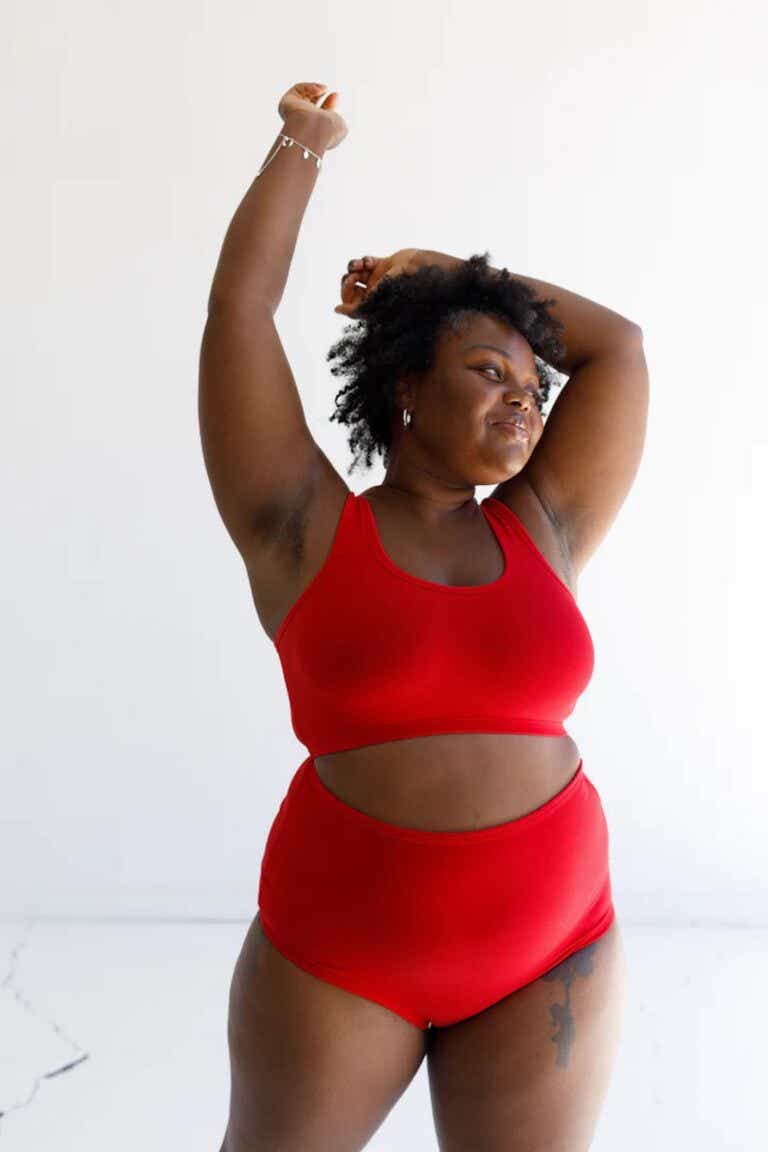 If you’re looking for a breathable cotton blend, these high-rise undies are a fun cute option. In sizes ranging from XXS to 6X, these panties will cover everything, and won’t dig into the most inconvenient areas. If you feel like indulging in a splash of color, go for the bold red cherry. 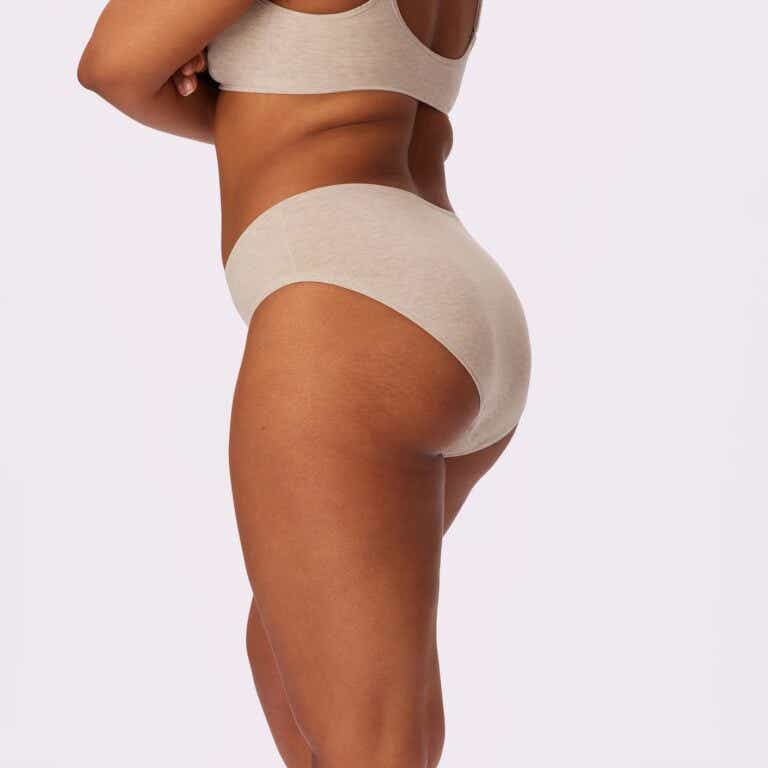 Here at KCM, we love Parade (Katie especially loves their comfy bras), so of course, we have to recommend their high-rise brief. The cut is sexy without being skimpy and uncomfortable, the sizes range from XS to 3X, and the cotton blend fabric is soft and wonderfully breathable. One reviewer gushes, “before owning these I had never tried high-rise undies before, and I have to say that I’m hooked now. The fabric is super soft, it doesn’t dig into your skin, and the high rise gives a little bit of extra coverage and comfort.” 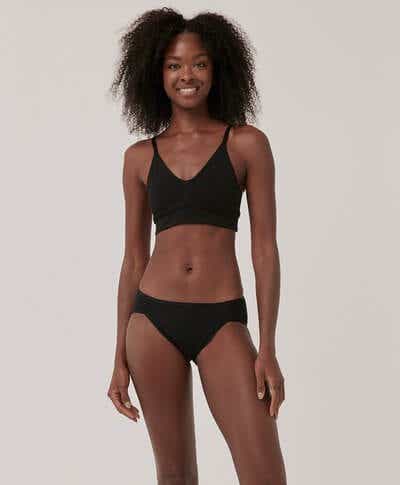 If you’re sick of buying single pairs of underwear, how about a six-pack? These cotton bikinis are made of breathable organic cotton and come in a variety of cute patterns. If you’re annoyed with cuts that sag during the day, don’t worry. One reviewer says that this pick stays put: “The cut is perfect. The fit is cute and comfortable. The material is soft and buttery. These are a definite go to for long lasting wear.” 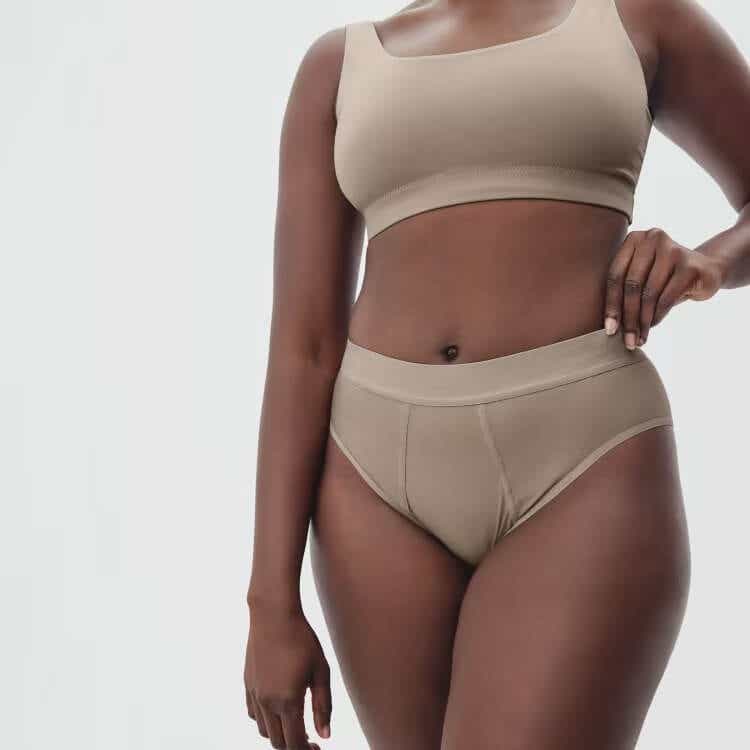 For a high cut, consider the Everlane Cotton Boy Briefs. These are made of Supima cotton and feature “minimal bum coverage” for a flattering and sexier touch. Reviewers say that the fabric is incredibly soft and that the high cut is fun and trendy. The high rise adds a dash of extra coverage without veering into frumpy territory. 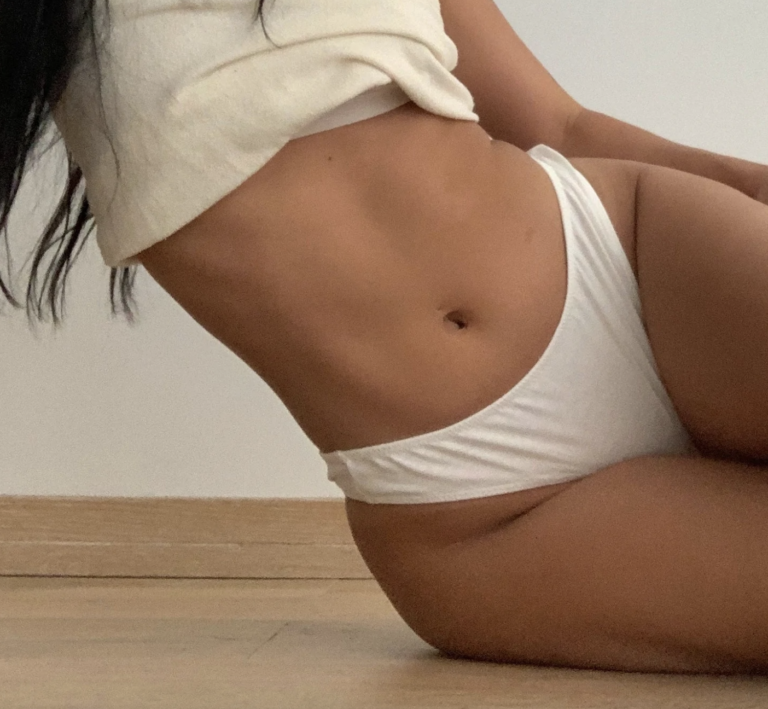 If your style of choice is a thong, we recommend getting a pair of KENT’s soft, organic cotton version. All of KENT’s undies are designed to be entirely compostable once they’ve reached the end of their life, and they’re all made with responsibly harvested pima cotton. Go with one of the packs to try KENT’s other styles, too. 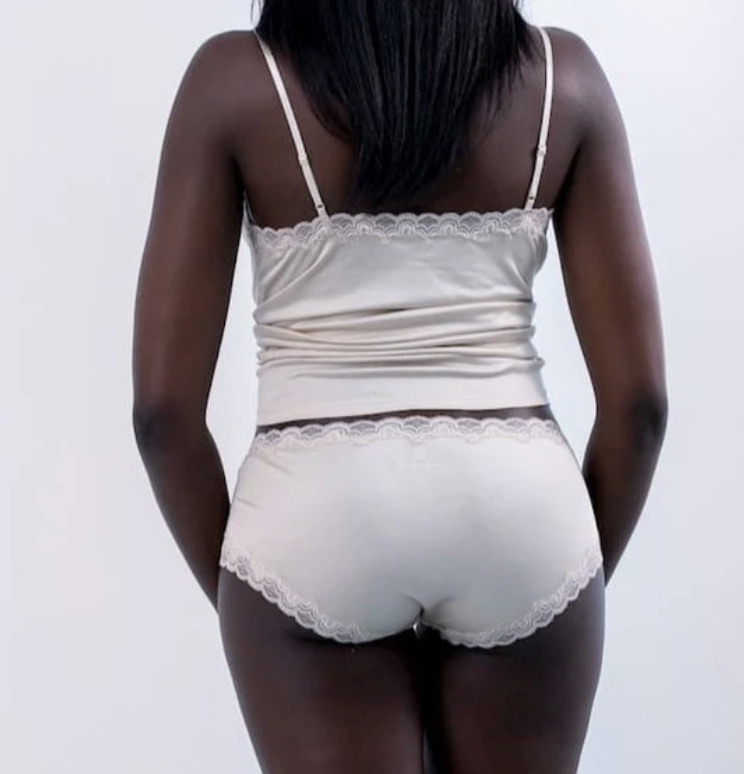 If you’re nervous about ditching your quick-drying synthetic undies (especially when it’s still very much summer), look no further than Uwila Warrior’s Soft Silk Briefs. They’re breathable, have a comfortable lace trim, and provide the perfect amount of coverage — not to mention they come in tons of colors and sizes from XS to 3X. Snag a matching cami while you’re at it. 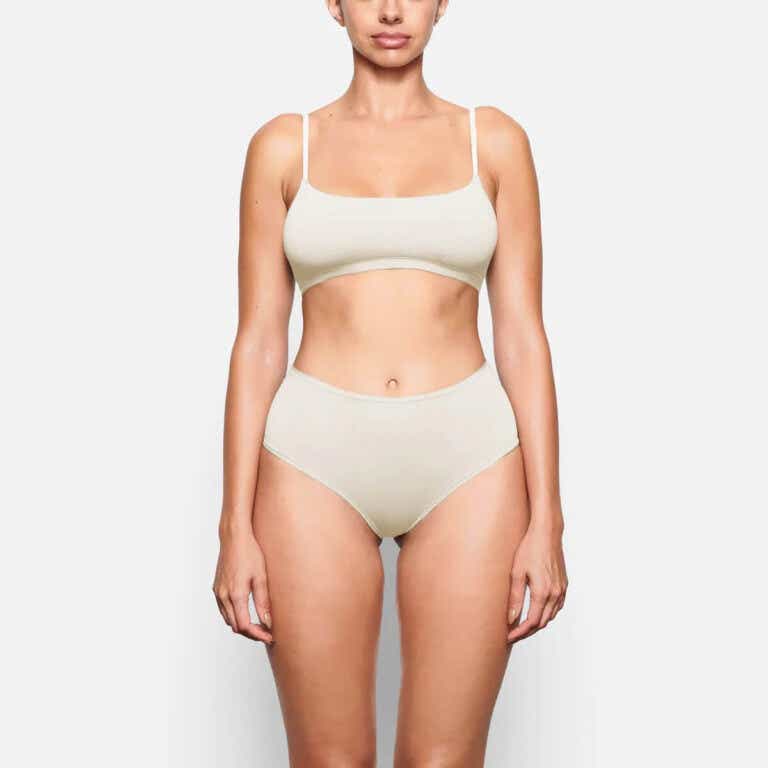 You’re probably familiar with Skims’ shapewear (and the fact that the brand was founded by Kim Kardashian), but they actually make super comfy bras and underwear, too. This pair of classic briefs is made from breathable cotton, comes in seven different colors, and is available in sizes 4X to XXS.