Including that unforgettable pink suit ensemble.

Even more than 25 years after her passing, Jackie Kennedy Onassis’s fashion still inspires many of us today. She was known for her classic, pared-down looks that were elegant and timeless, no matter the event. From family outings to government events, the former first lady always looked chic. She was perhaps known best for her pillbox hats and skirt suits, but even after her time as first lady, her day-to-day outfits remained stylish.

While Jackie often wore designer clothes — her favorite suits were from Chanel and Oleg Cassini — they never felt showy or over the top. Clean silhouettes were paired with a strand of pearls and sometimes a broach, adding a bit of sparkle to an otherwise plain look. When it came to picking out an outfit, Jackie always knew that less was more.

It’s impossible to pick a favorite outfit from the endless out-of-this-world options, so we decided to settle on five of our favorites. Since you most likely won’t be giving any White House tours or flying to far-away places to meet foreign officials, we decided to focus on ways to casually emulate Jackie’s style, even when taking inspiration from her more formal outfits. Most of her choices are quite easy to recreate if you know where to look, and we tried to stick to silhouettes and looks that are back in style today — however, you could definitely argue that they never went out of style. From the sleek pink evening gown she wore to a state dinner to the timeless large sunglasses she often wore while traveling, we’ve curated some pieces that will help you emulate some of her most admired outfits. As to her perfectly styled brunette hair, unfortunately, you’re on your own. We hope that Jackie O. would be flattered to know that she’s still a fashion icon after all these years.

The pink suit she wore on the day of her husband’s assassination will go down in infamy for so many somber reasons. But that wasn’t the only time she wore a pink skirt suit. She wore a light pink one in 1962 during happier times. Jackie was often photographed wearing a sleek skirt suit, white gloves, and pearls, always exuding class and elegance. 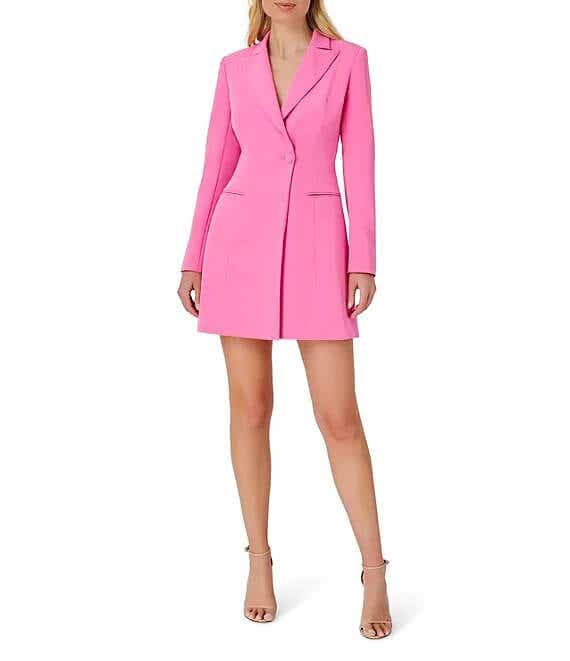 If you want to channel that morbid moment in history, by all means. This suit is similar in color to what she wore on that fateful day. A playful take on the skirt suit, this tuxedo dress modernizes Jackie’s look. 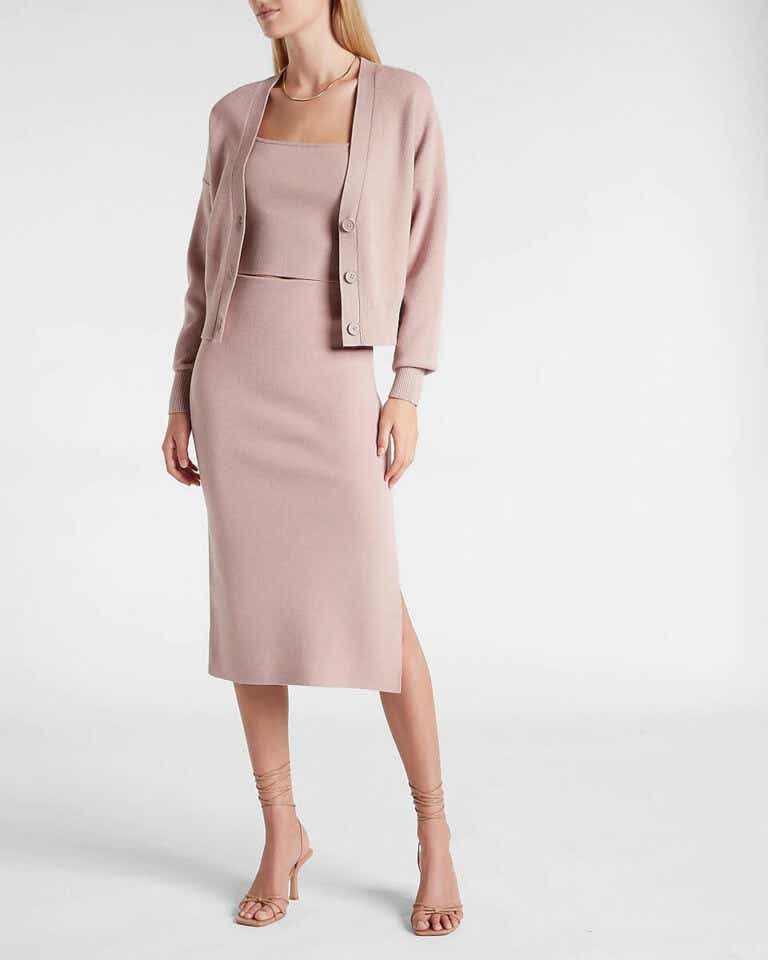 While this isn’t exactly like her tweed suit, it’s a modern take on the light pink suit she wore in 1962. This three-piece set is a similar rosy hue, and the midi skirt has a classic length and pencil cut. 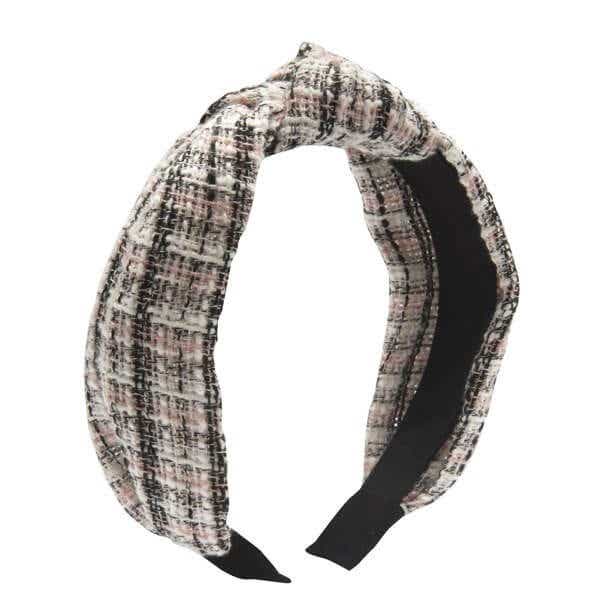 It’s hard to find a pill box hat these days, but that doesn’t mean you can’t channel the elegance the accessory had. This tweed headband pulls the look together, as it adds some texture to the look and incorporates hints of pink from the set. 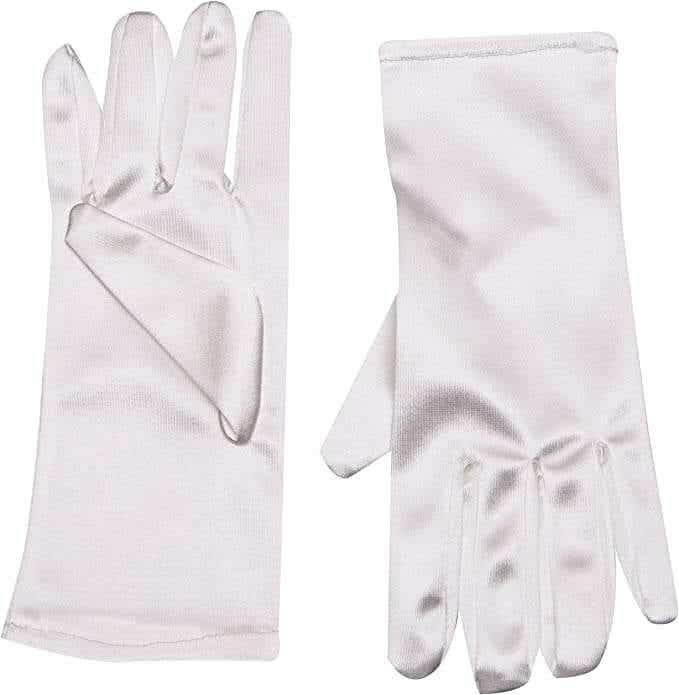 For that extra touch of glam, don’t forget the white gloves. These go slightly above the wrist, that way your arm won’t show between your sleeve and the gloves. 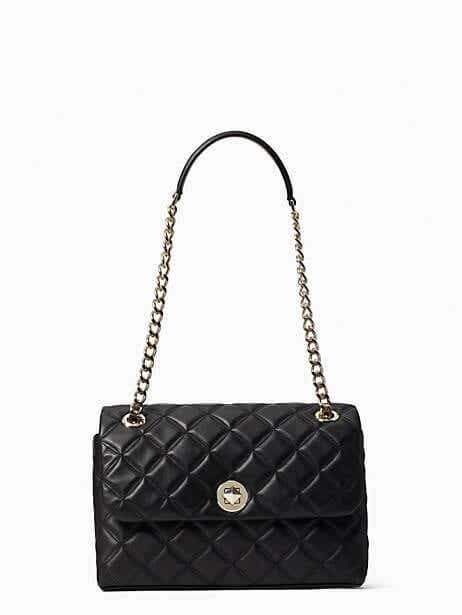 A Chanel bag isn’t necessarily in our budget, but thankfully you can find plenty of purses inspired by the classic quilted leather bag. This one has a gorgeous gold chain as a strap.

Jackie always knew that less was more when it came to outfits. A simple button-down shirt and linen slacks make for a refined look, accented with a simple silver and gold choker necklace and leather bracelet. Despite being on a ferry, she looks yacht-ready. 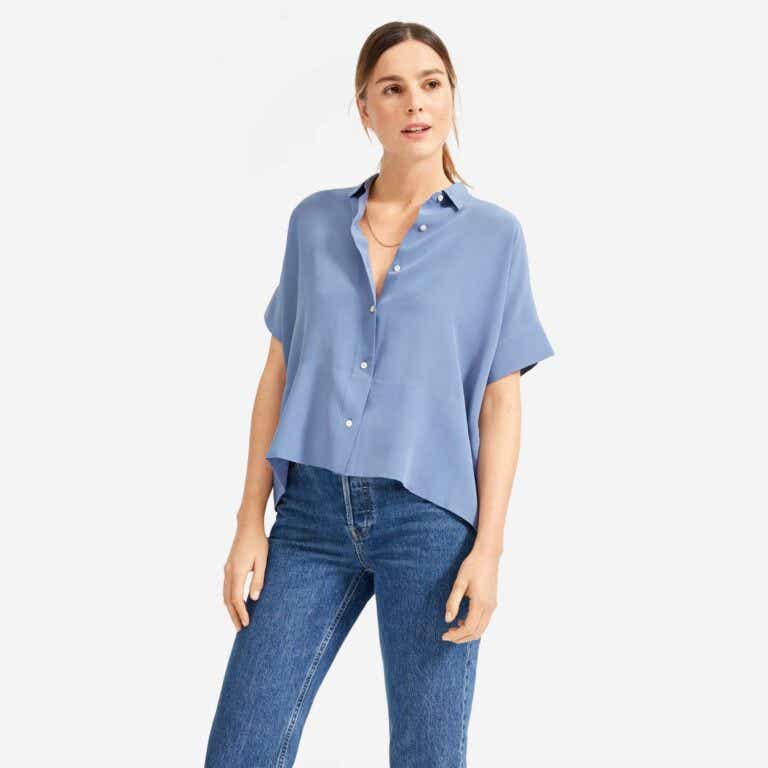 While Jackie’s top is more of a dark navy blue, you get the same sleek look with this lighter blue silk blouse. A drapey silhouette keeps things feeling casual, despite the luxurious fabric. 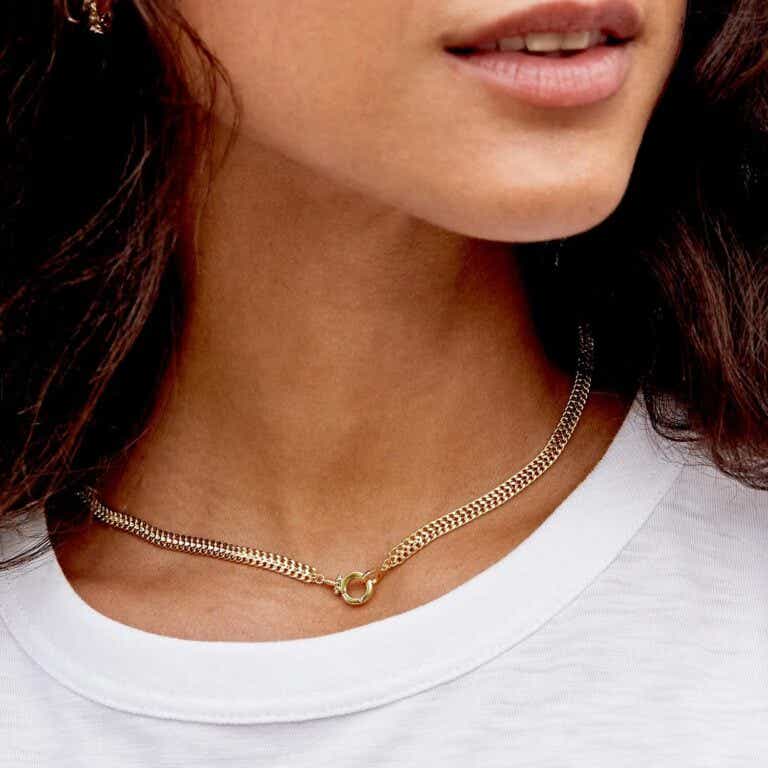 While this isn’t the same duo-chrome necklace the fashion icon wore in the photo, the thick chain gives a similar look. Jackie was known for her necklaces, and this chunky chain is chic, yet statement making, much like the former first lady herself. 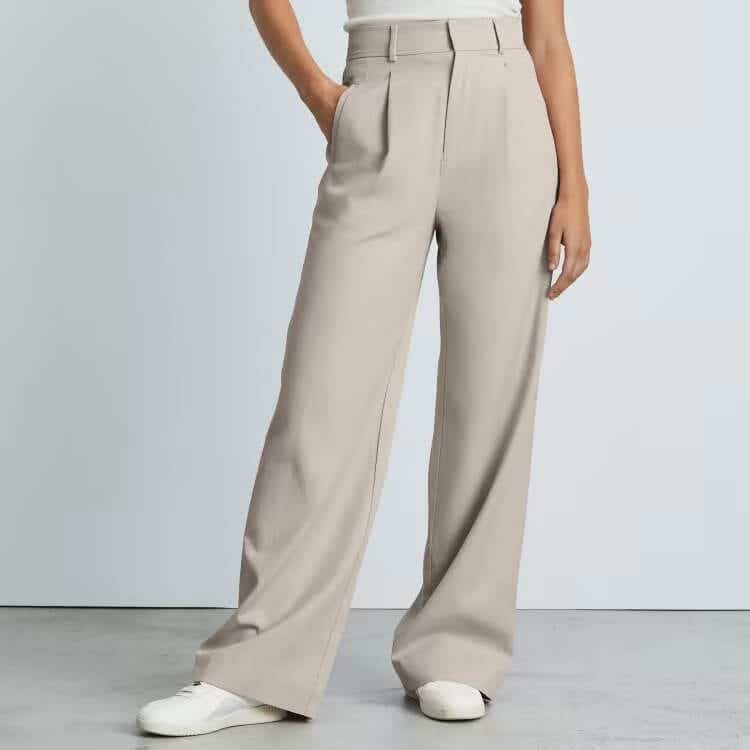 A simple pair of slacks will serve as a staple in your wardrobe, whether you’re recreating a famous look or not. These straight-leg trousers are extremely comfortable and flattering thanks to their high-waist silhouette and straight leg cut. 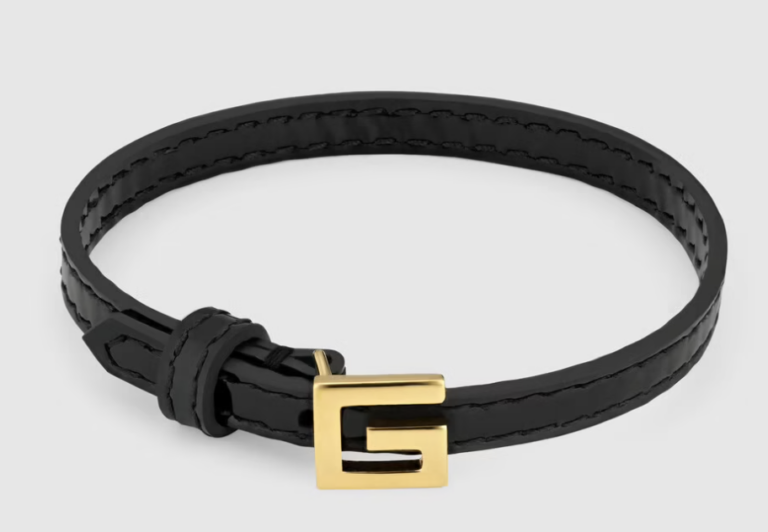 We don’t know what the D on Jackie’s black leather cuff stood for, but this one is near identical. The only difference is that the gold letter is G instead of D. And here, it stands for Gucci. It boasts the same sleek look as the bracelet she wears. Gold and black pair together in a classic color combo.

Who says you can’t dress up for a casual picnic? Jackie donned a mint green sheath dress to this one, made with beautiful brocade fabric and a fitted silhouette. She looks effortlessly glamorous, wearing only a pair of pearl earrings as accessories. For a more modern take on the look, we swapped out the sheath for a midi dress, which offers you some more movement. 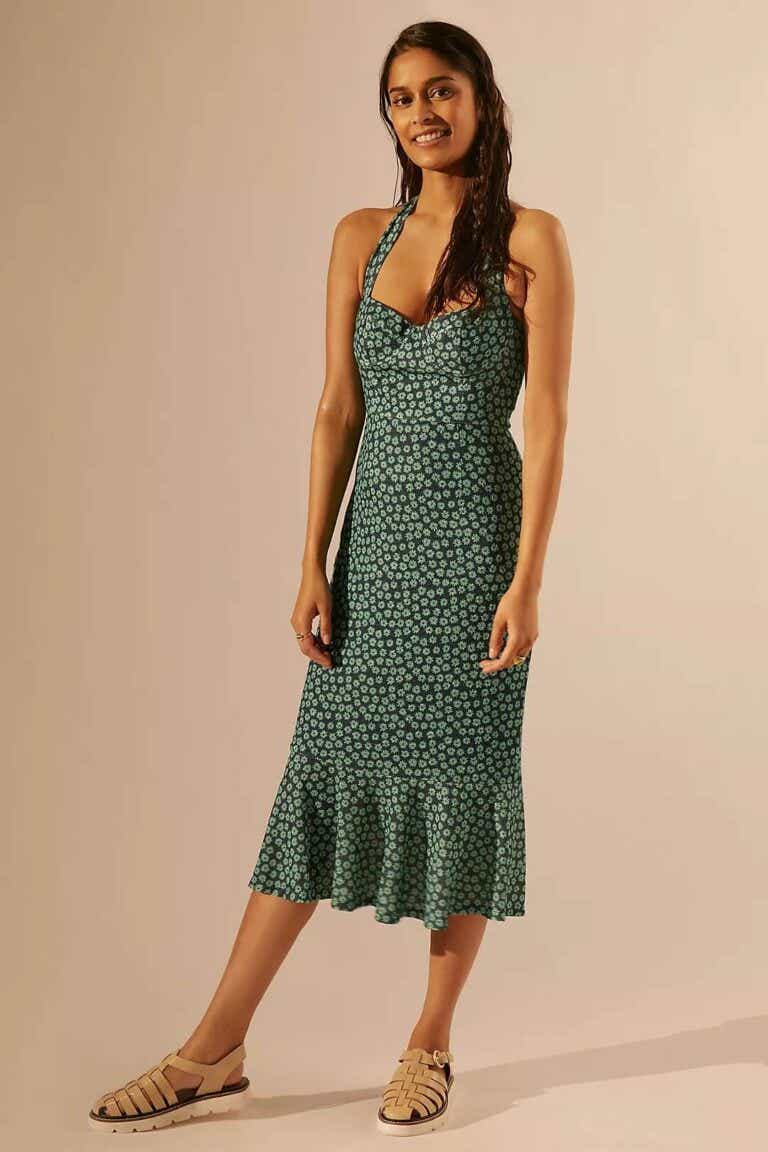 For a more modern take on the shift dress, opt for a bustier-style midi dress. The pattern is a floral similar to that of the dress she is wearing, but the longer silhouette and different top are a fresh take on the outfit. 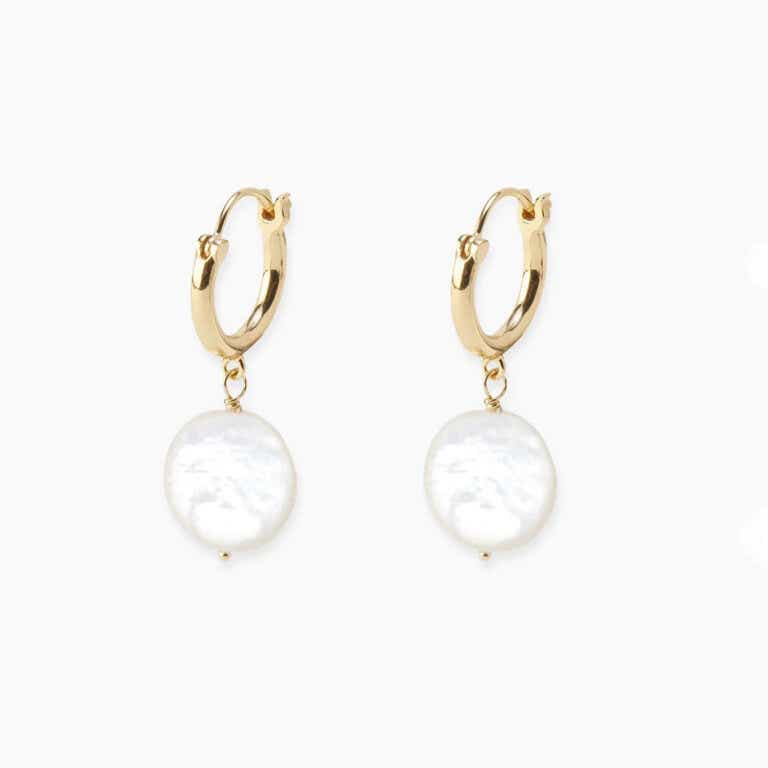 Following the pearl theme, Jackie paired her dress with some simple gold and pearl studs. Although these are hoops, they’re small enough to not weigh down your ears or feel gaudy, and the pearl serves as the focal point. 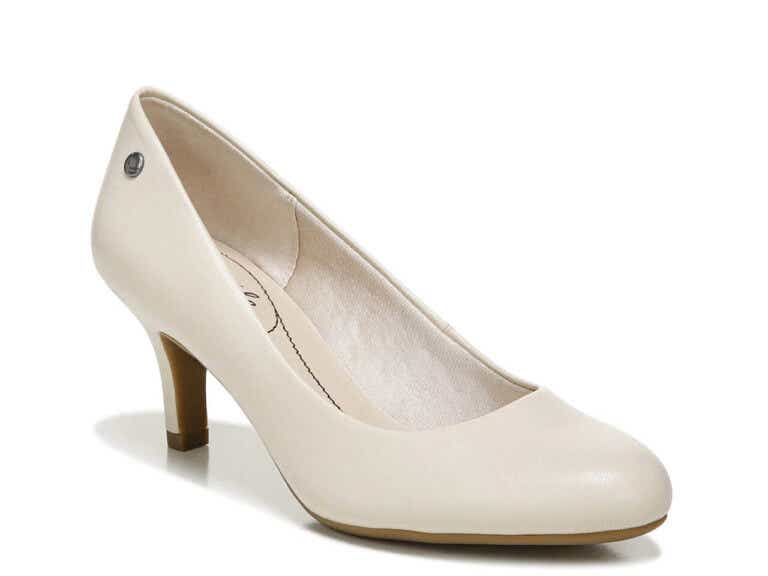 You can’t see the shoes she’s wearing in the photo, but based on other photos from the same day, white kitten heels were the finishing touch to this outfit. We’re big fans because of how comfortable they are compared to stilettos, and the pointed toe on this pair lengthens your legs a bit, too.

We’ve all run through the airport in sweats or leggings, but the times we actually do dress up for a flight feel different. A simple wool coat and turtleneck look extremely chic while also being comfortable for a flight across the Atlantic. She paired the look with giant sunglasses and leather gloves. 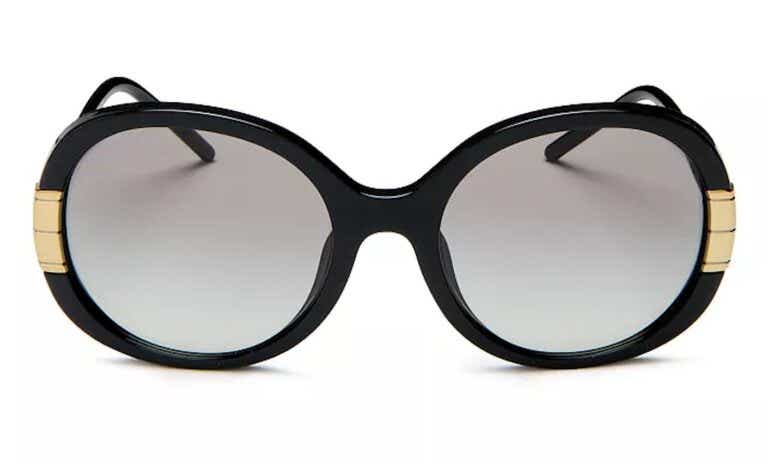 Perhaps Jackie was shielding her eyes from the cameras flashing, but these sunglasses ooze ’70s glamour for any occasion. Big lenses protect your eyes from the sun and we like these in maroon for a deeply rich accent to an outfit. 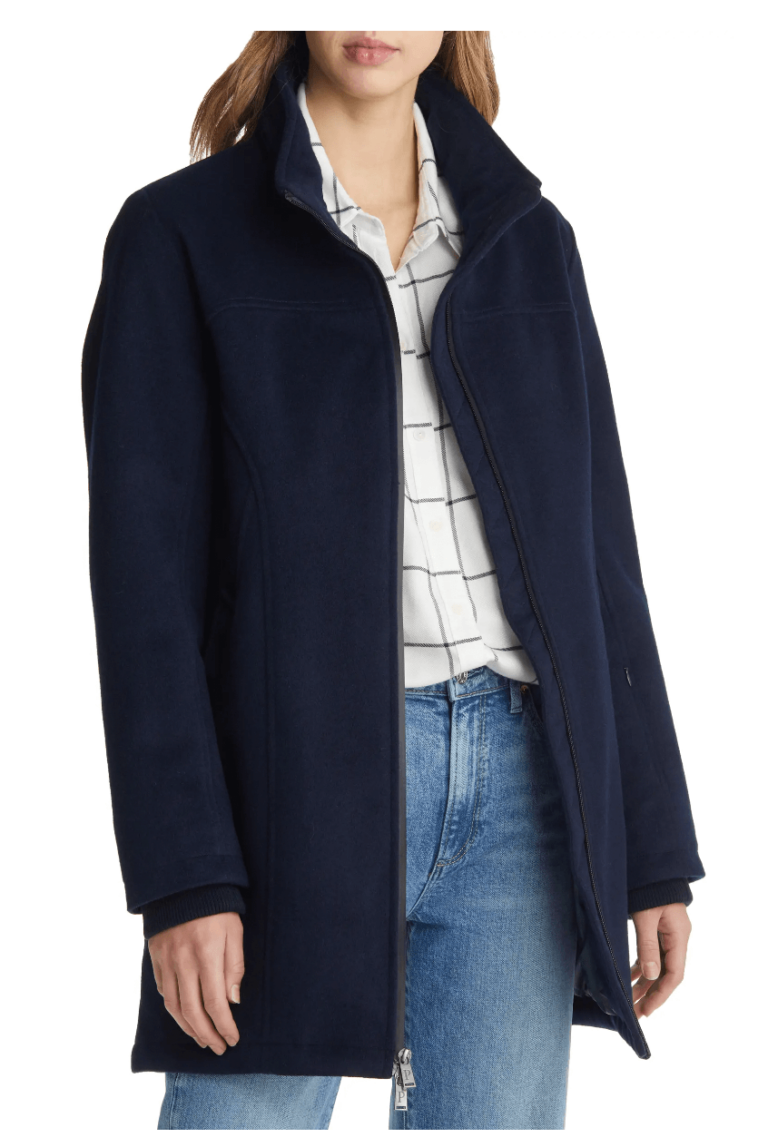 A wool coat will serve you for years to come, keeping you warm in the coldest of climates and acting as a sleek outer layer to your outfits. This one has a hidden zipper down the front to keep the jacket closed, while also creating a minimal look. 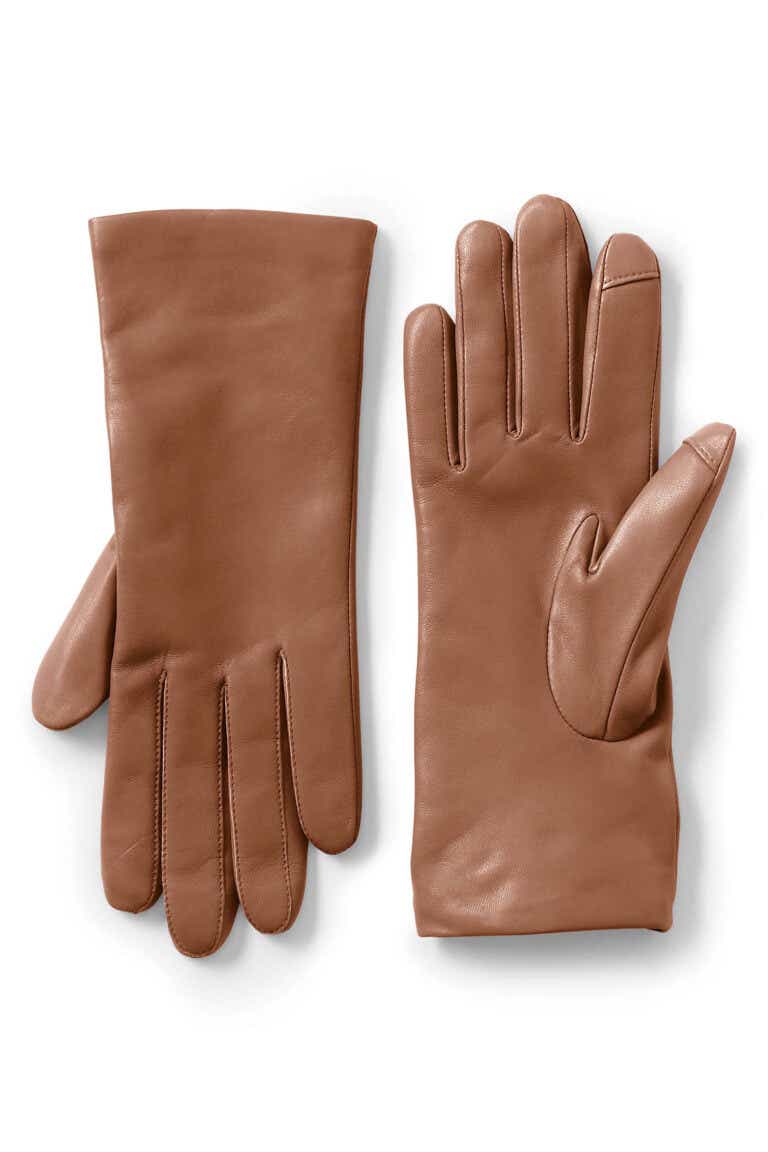 Sure, gloves will keep your hands warm on a chilly day, but they’re also an amazingly chic addition to any outfit, especially when they’re leather. These ones from Lands’ End are even lined with cashmere, so they’ll feel like wearing your favorite sweater every time you slide them on. Even better? The pointer finger and thumbs of the gloves are tech compatible, so you can scroll or text while wearing them. 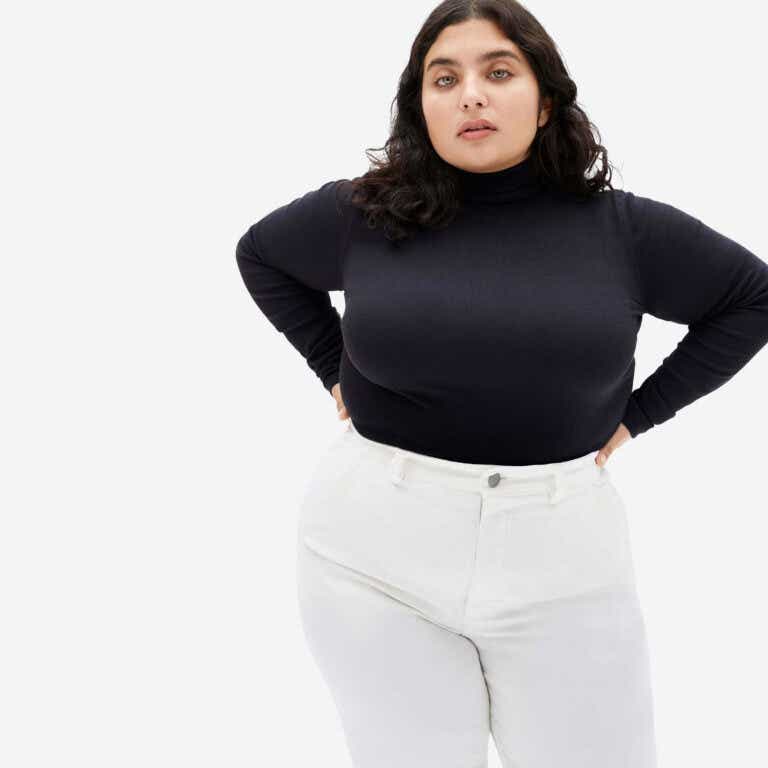 Jackie always made basics feel elevated and new, and this outfit is no exception. Layered under her jacket is a simple black turtleneck, which is great for wearing alone or as a base layer when you need some extra warmth.

It’s been recreated in countless movies, including Jackie, the 2016 film starring Natalie Portman as the former first lady, but no one will ever pull it off as well as Jackie herself. The red suit she wore to give a tour of the White House was seen on televisions all across the nation, and it’s an image that lives in many of our minds when we think of Jackie’s famous looks. 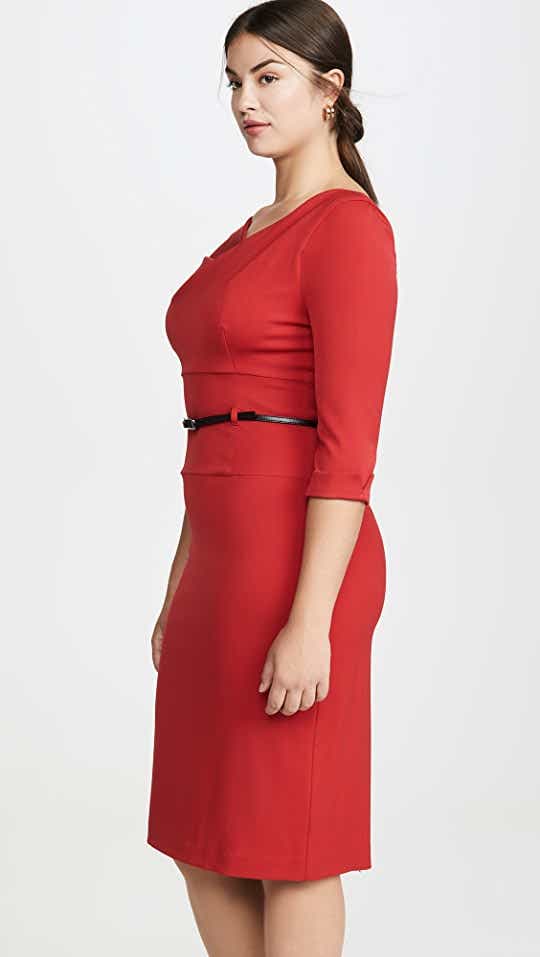 Jackie is technically wearing a skirt and jacket in the photo above, but the two so seamlessly blend together that it looks more like a dress at some angles. This dress, named after the style icon herself, draws inspiration from the look she wore in the White House tour. 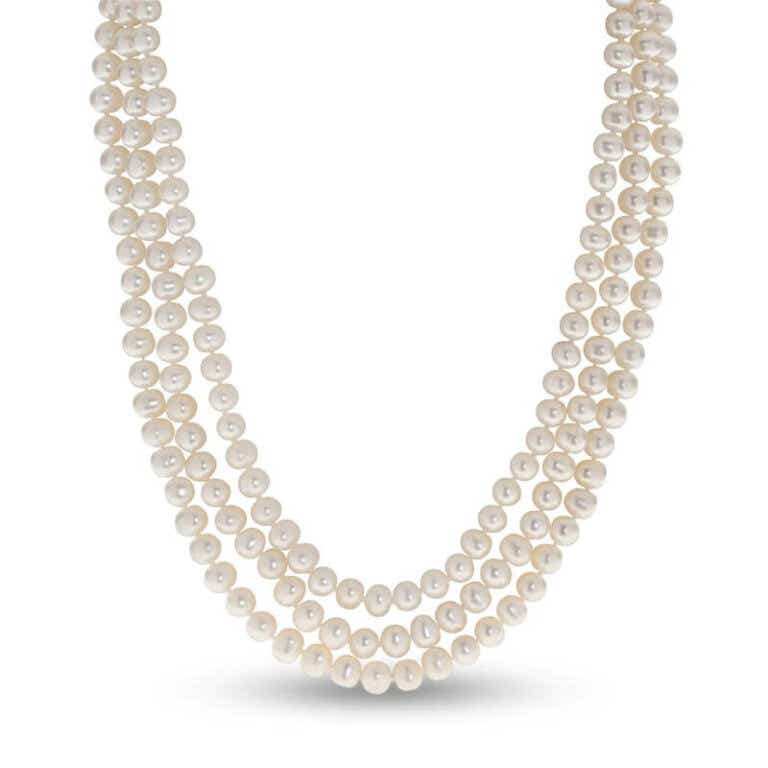 “Pearls are always appropriate,” Jackie once said. She wore three strands for this occasion, and they just barely peeked above her collar. 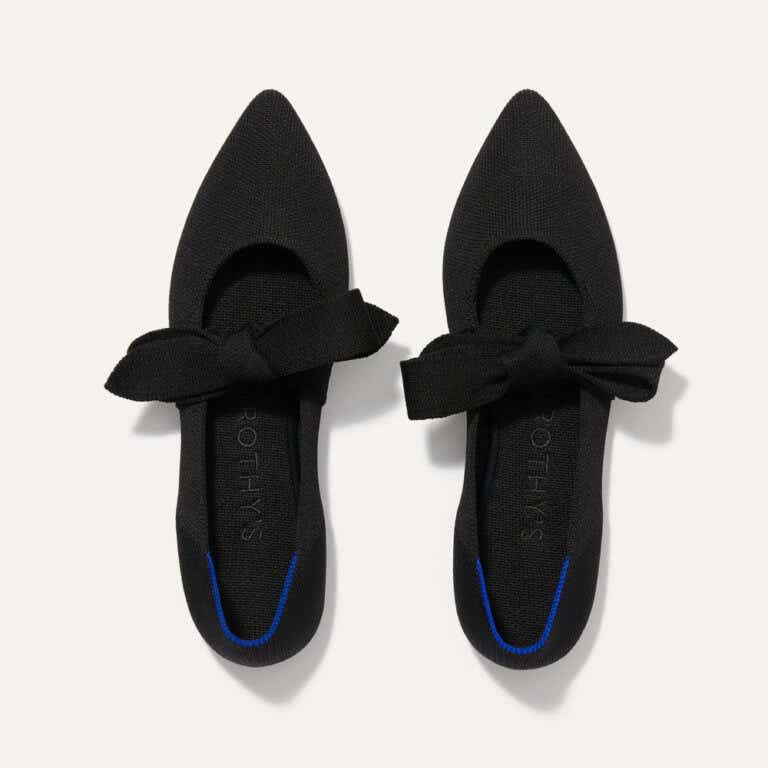 While you can’t see what she’s wearing in the photo, other shots of her from the CBS tour show she’s got on plain black pumps. If you’re not into the idea of wearing heels, go for a pointed-toe flat, like these, which are comfortable and elongating.