It’s more common than you may think.

Having battled severe acne as a teen, I remember firsthand the pain and embarrassment of a major breakout. It made me incredibly self-conscious and want to avoid any sort of school function (especially if I knew a crush would be there). Now, more than a decade later, those blistery bumps have returned with a vengeance, and they’ve brought fine lines and wrinkles along with them. What a combo.

But my acne’s return didn’t necessarily take me by surprise; my mom, who’s in her 60s, still gets the occasional breakout. Wondering if we were the only “lucky” mother-daughter pair of our kind, I did a little digging and learned that acne isn’t just the bane of every teenager’s existence — it’s becoming increasingly more common among adults.

“Adult acne is skyrocketing, but the marketplace hasn’t truly caught out to the demand that is there,” Dendy Engelman, MD, a board-certified dermatologist at Shafer Clinic Fifth Avenue, tells Katie Couric Media.

While it can affect everyone, women tend to deal with more breakouts than men, due to fluctuating hormones. The American Academy of Dermatology says that 50 percent of women ages 20 to 29 battle acne, as well as 25 percent of those ages 40 to 49. And not only is acne common among women in their 40s and beyond, but there aren’t enough products specifically catering to this demographic.

Here’s a breakdown of what adult acne is, why it may not go away with age, and how it could be indicative of an underlying health condition.

Adult acne, or post-adolescent acne, is defined as breakouts that happen after age 25. This could mean that some adults could have perfectly clear skin as a teenager and not develop acne until much later in life — or they may have suffered pimples when they were young and continue to battle breakouts well into their 30s, 40s, 50s, or 60s.

As for severity, Dr. Engelman says the vast majority of adult acne cases tend to be either mild or moderate. And with adults, most of these breakouts are formed on the lower half of the face, such as along the jawline, chin, or neck. She adds that this has mostly to do with fluctuating hormones that can happen during your period.

Even with these telltale signs, you could have adult acne and not even know it, because it often gets confused with other skin conditions, such as rosacea. Both cause redness, bumps, and pustules on the face. But Danilo Del Campo, MD, tells us that the main difference is that the redness associated with acne tends to be located just around the pimple. In contrast, the redness of rosacea typically covers a large area.

“As we get older, sometimes people’s skin starts to migrate from what started as standard acne to another similar condition called acne rosacea,” says Dr. Del Campo. “But, unlike acne, rosacea is a chronic condition.”

In general, the same factors that can cause breakouts in teens are also at play in adults. This includes excess oil production, pores becoming clogged by “sticky” skin cells, bacteria, and inflammation.

That said, dermatologists say the two biggest driving factors for adult acne are hormones. Unfortunately, women going through menopause are disproportionately affected because the natural decline of estrogen hurts the skin’s ability to ward off acne, leading to acne later in life.

Family history also plays a role, as I’m experiencing now. If your mom or dad has acne, chances are you might have a genetic predisposition for adult acne. And if your family history is as clear as a blessed post-pubescent kid’s skin, then the underlying cause of your breakouts could be stress-related: Researchers found a link between flare-ups and increased levels of the hormone androgens, according to the American Academy of Dermatology Association. In response to stress, our bodies produce more of sex hormones known as androgens, which stimulate the oil glands and hair follicles in the skin, which can lead to acne.

What about other common factors?

Dr. Del Campo points out there could also be several other indirect factors, such as everyday hair products. For instance, if you notice a breakout around your hairline, Dr. Engelman, says products like conditioners could be to blame, so it’s important to avoid ingredients that can clog pores, including coconut oil, wheat germ oil, and cocoa butter. But luckily, Dr. Engelman says most makeup products are oil-free these days, so they’re not usually a culprit.

Diet is another commonly overlooked factor: You probably remember your mom or grandmother warning you to avoid certain foods like chocolate and pizza. But Dr. Engelman says research doesn’t confirm that these foods directly cause acne. That said, they both are considered high glycemic, which can, in turn, raise levels of sugar and can trigger acne.

Could adult acne be a symptom of underlying health conditions?

In some cases, acne can be a sign of an undiagnosed medical condition. This includes everything from being insulin-resistant to having polycystic ovarian syndrome or other endocrine disorders in women. The good news is that once this medical condition is properly treated, the acne often goes away.

“The skin is the window to your health and it’s the largest organ,” says Dr. Del Campo. “It’s the only one that we can easily see, so whenever things go wrong from the inside, sometimes there are subtle signs that you can see from the outside.”

What are the most effective adult acne treatments?

The same products used for teen acne don’t always work for adults, whose skin typically becomes more sensitive over time. Luckily, dermatologists have a lot of tools in their arsenal to combat adult acne, depending on its type and severity.

For instance, topical tretinoin, which works by turning over skin cells faster to prevent clogged pores, is a mainstay in any acne treatment regimen and has the bonus of treating fine lines. Isotretinoin — including Accutane — is taken by mouth and considered the closest thing to a “cure” for severe acne that exists. But it comes with its own set of risks. (Pregnant women need to stay clear, because it can cause significant harm and birth defects to the fetus.)

In-office light-based treatments, such as photodynamic therapy, can sometimes help and are considered more viable options for those who may not want to take medication. The downside is they’re not typically covered by health insurance and can be very expensive.

But some alternatives don’t require a doctor visit or necessarily insurance. Seeing a huge demand, CEO and co-founder Sarah Waldock teamed up with Robin Schaffran, MD, to create BalmLabs, a skin-care brand that’s specially formulated for adult acne. One of the company’s main ingredients is cannabidiol (CBD), which is an active ingredient in cannabis that’s derived from the hemp plant.

“CBD was very interesting to me as an ingredient because it was anti-acne and it also had an anti-inflammatory effect, which was really critical in treating acne in sensitive skin without drying or irritating anything,” Dr. Schaffran tells us.

But, due to delays in the evolution of federal regulations, Dr. Del Campo says CBD is not well-studied and needs more clinical data.

Acne, whether you get it as a teen or adult, isn’t about vanity — dermatologists agree that it can have a significant impact on your mental health. According to a 2018 study published in the British Journal of Dermatology, a patient’s risk for a diagnosis of major depressive disorder spikes by more than 60 percent compared to the rest of the population.

“Mental health and skin health go hand in hand,” says Dr. Del Campo. “Having clear skin is an important boost of confidence for both younger and older adults.”

Ready to try some at-home treatments? Here are some powerful options we can recommend: 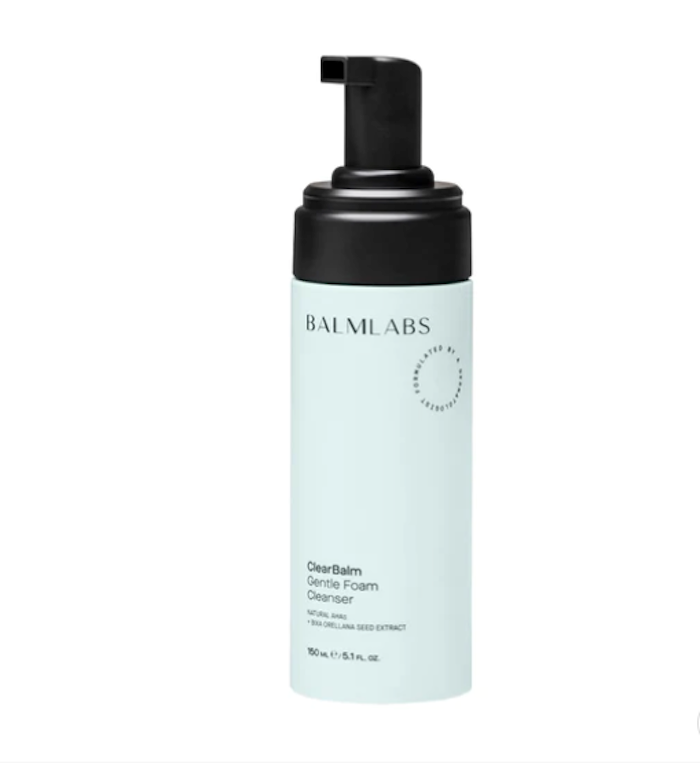 CEO and co-founder Sarah Waldock teamed up with Dr. Robin Schaffran to create BalmLabs, a skin-care brand that’s specially formulated for adult acne. One of the company’s main ingredients is cannabidiol (CBD), an active ingredient in cannabis that’s derived from the hemp plant. If you’re just starting out, try their foam cleanser that eliminates pore-clogging oil, dirt and make-up, leaving skin refreshed and nourished, not parched. 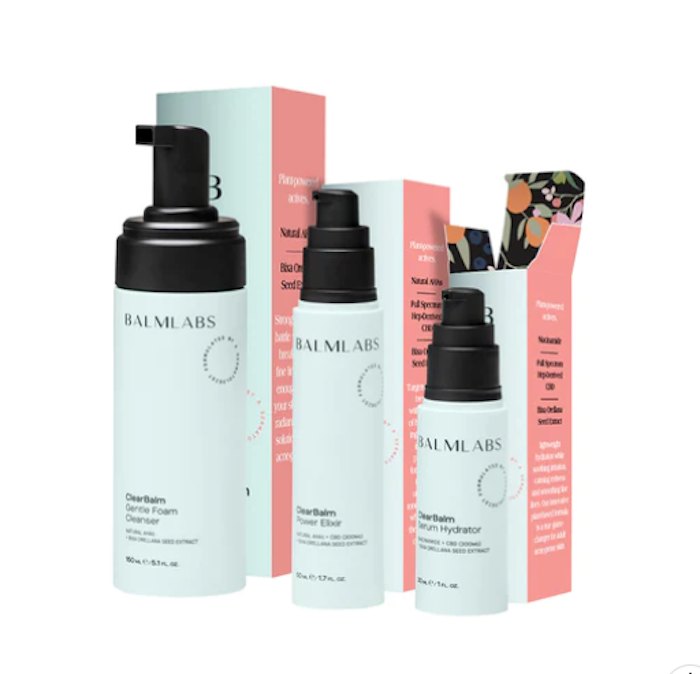 Ready to take the next step? BalmLabs has a 3-step system worth investing in. The set features their three products — a cleanser, gentle exfoliating power elixir, and lightweight hydrating serum. These products are powered by the brand’s SuperStar 6 plant-based actives, and are strong enough to remedy your worst breakouts, but gentle enough to leave your skin soft and smooth. 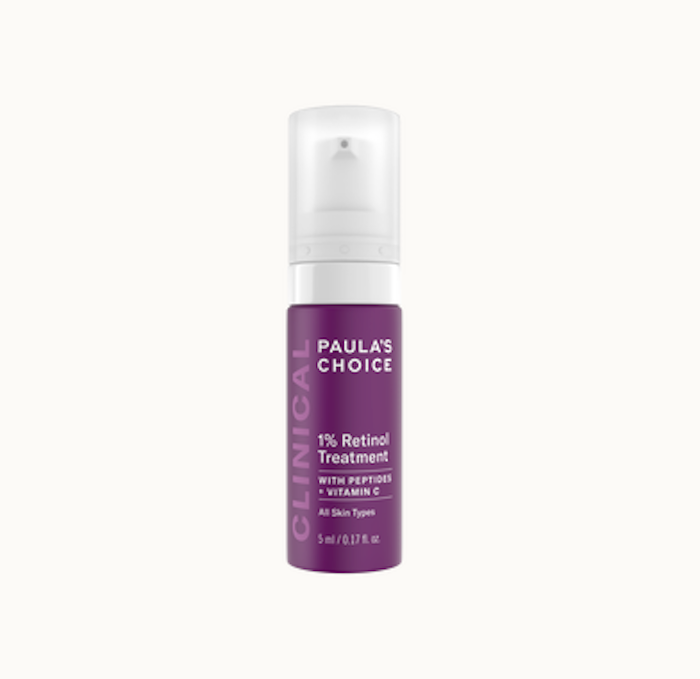 While tretinoin has become popular in adult acne treatment (among other skin conditions), you need a prescription. The difference between tretinoin and retinol is strength; tretinoin is basically a more concentrated version of retinol. It’d be smart to start out on retinol, which doesn’t require a prescription, to see how your skin reacts. Katie Couric Media editor Justine Carreon likes this Paula’s Choice pick because of its lotion-like texture and high strength. 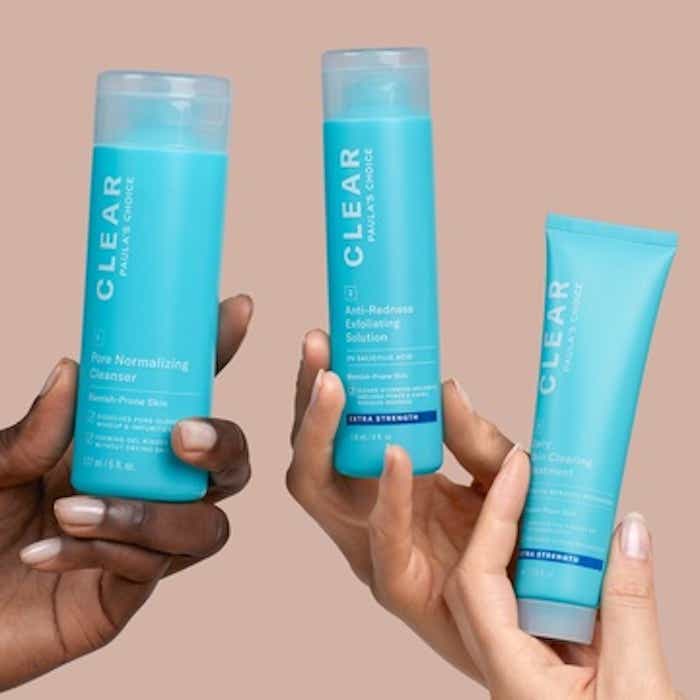 Paula’s Choice also makes a 3-step system for stubborn adult acne, which includes a cleanser, an exfoliant, and a treatment. It works to lessen excess oil, unclog and shrink enlarged pores, and help you control stubborn acne breakouts without creating dryness or redness. It’s also free of harsh chemicals.